How much plastic is in the ocean? | Life Without Plastic
515
post-template-default,single,single-post,postid-515,single-format-standard,ajax_fade,page_not_loaded,qode-page-loading-effect-enabled,,qode-title-hidden,hide_top_bar_on_mobile_header,qode-content-sidebar-responsive,qode-child-theme-ver-1.0.0,qode-theme-ver-16.7,qode-theme-bridge,disabled_footer_bottom,wpb-js-composer js-comp-ver-5.5.2,vc_responsive

26 Jun How much plastic is in the ocean?

Posted at 11:40h in Thoughts by Alexis McGivern 2 Comments

The Internet is a magical place. It can connect you to people who you’ve never met but who share the exact same values as you do. I’ve been lucky enough to get to know Katt Andryskova, an awesome conservationist living (mostly underwater) in Australia. Katt’s blog is a treasure trove of vegan recipes, musings and practical tips. We recently exchanged blogs for a guest post. You can find mine here. Without further ado, I hand over to Katt!

Walking on a beach and side stepping plastic is extremely discouraging, especially en you see a person in front of you casually flick a cigarette onto the ground. How are so many people apathetic about what is happening around us? Why do beaches, parks and forests look like miniature landfills? An even scarier thought : How much garbage is in the ocean? 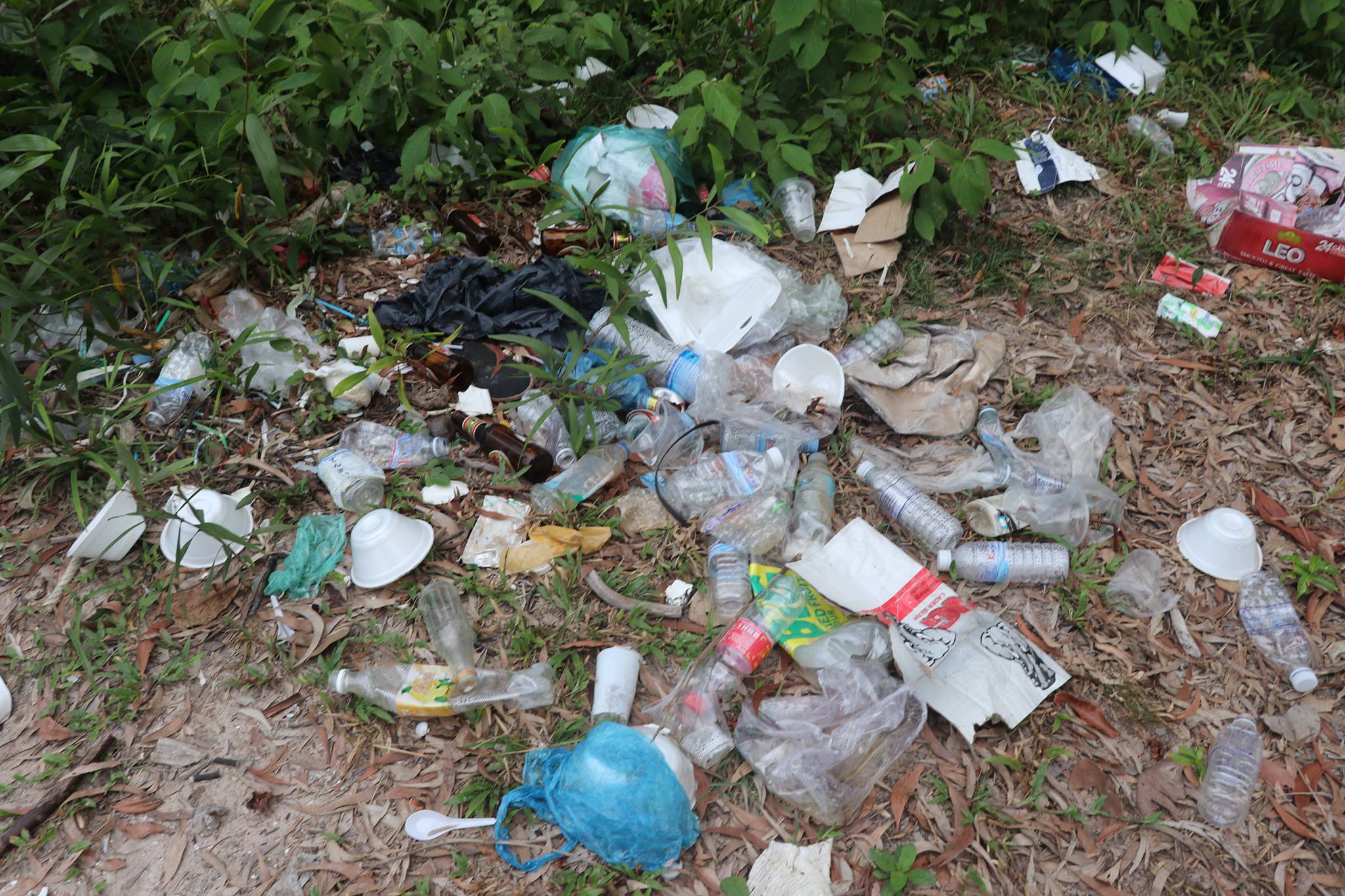 The ocean makes up for 75% of the total earth’s surface, and stretches into unknown depths. All of the junk we see in the rivers eventually ends up there, many nations still throw their garbage overboard and microplastics from our clothes all wash down the drains to our oceans. It is said that by the year 2050 there is going to be more plastic in the ocean by kg than fish. A terrifying thought without a palpable solution. 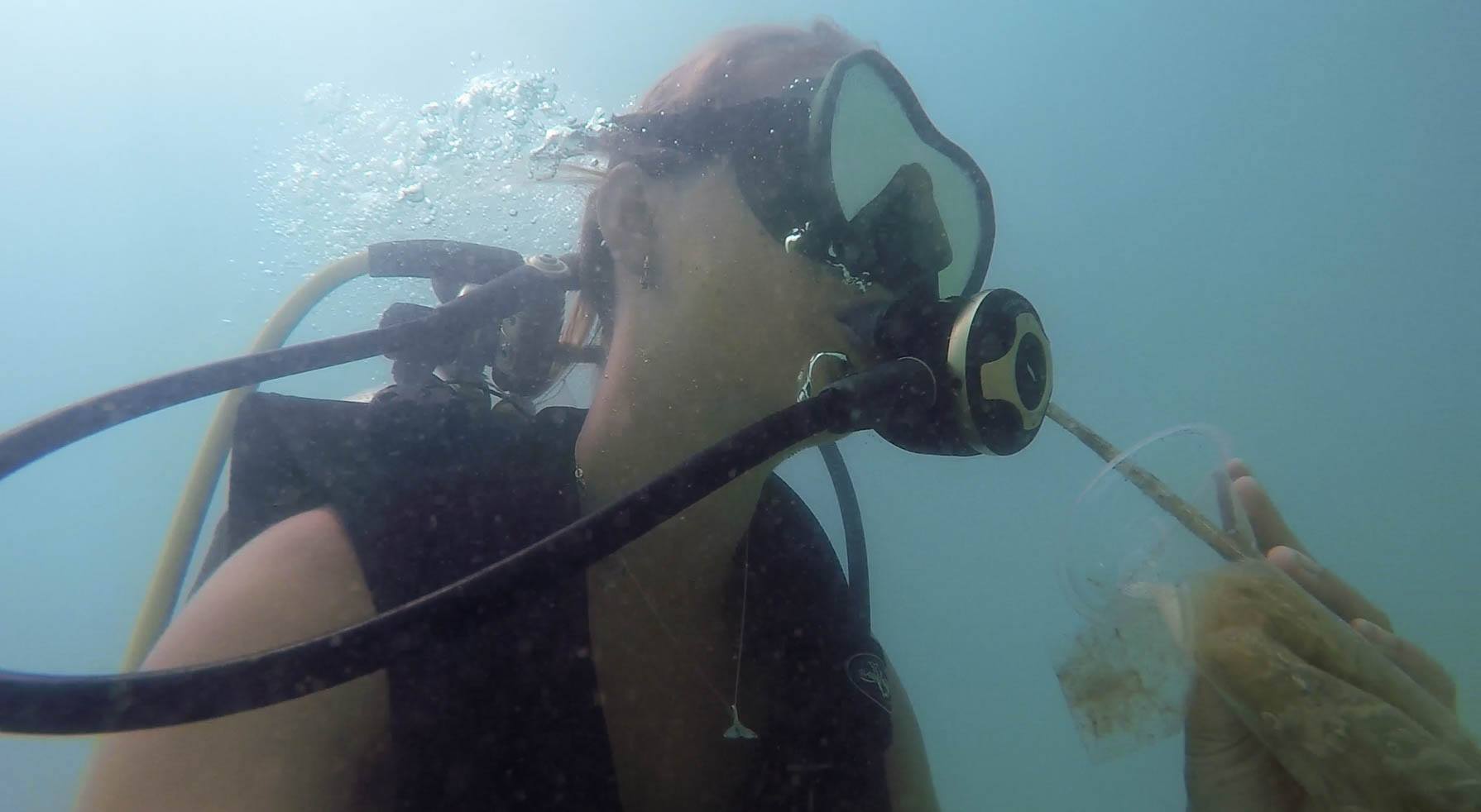 As a scuba diving instructor I spend a lot of my time underwater, and while I am continually mesmerised by the beauty of the underwater world I am also saddened. I spent the past three weeks in Cambodia which has very little to no garbage management. On the islands, such as Koh Rong, the rubbish is either shipped back to the mainland to their landfills or burned. The surrounding waters show hard evidence of this. I like saying “Every Dive Is A Clean Up Dive”, and in Cambodia this is really the case. I began needing to actually choose what rubbish to collect. 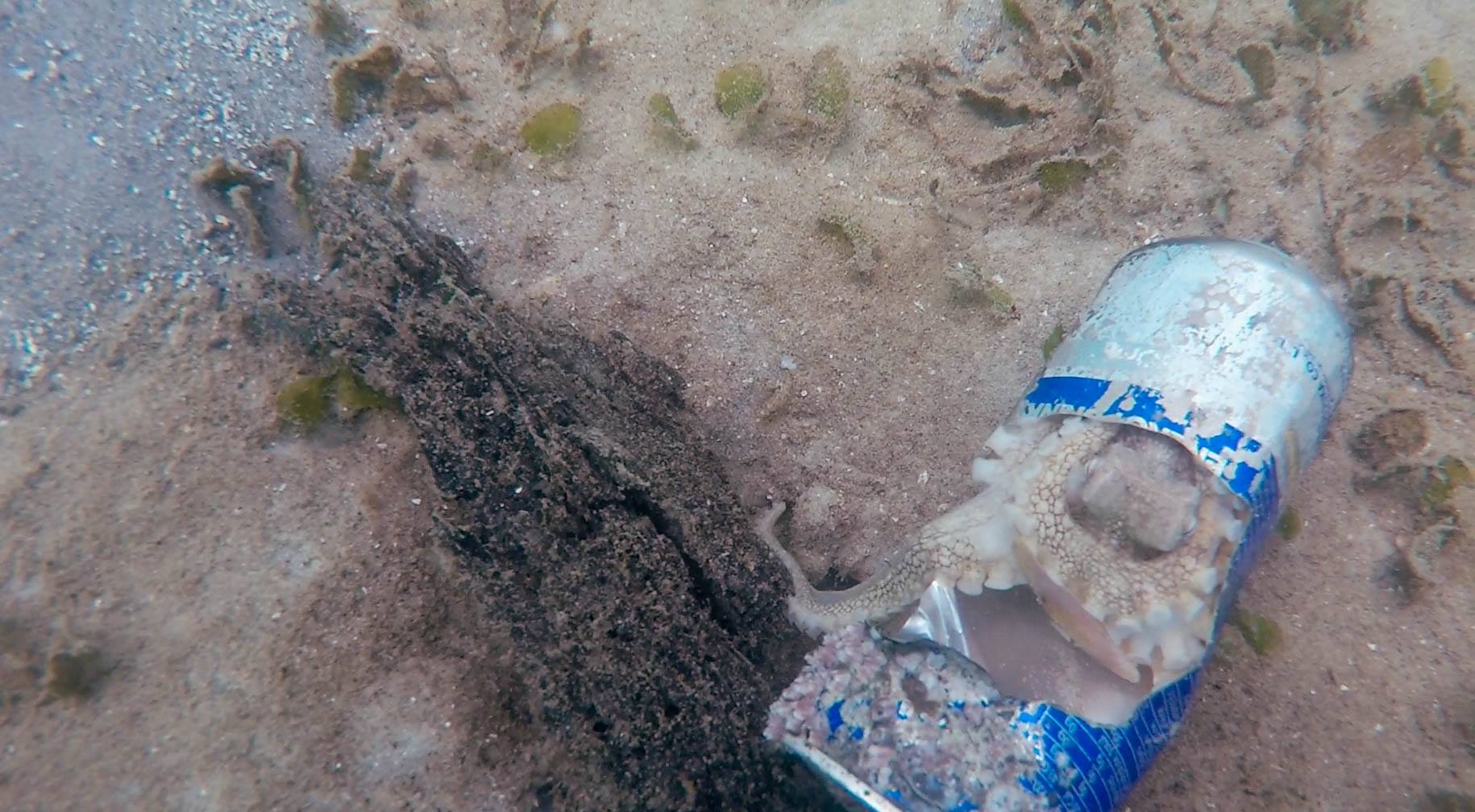 As Alexis has pointed out many times, saying “no plastic, please” is the one and only solution to this worldwide problem. Decreasing demand is the only way to decrease the worldwide production. Plastic only came into existence in the past 50 years, and now, every single piece that has ever been created is still on this planet: in landfills or in the oceans. 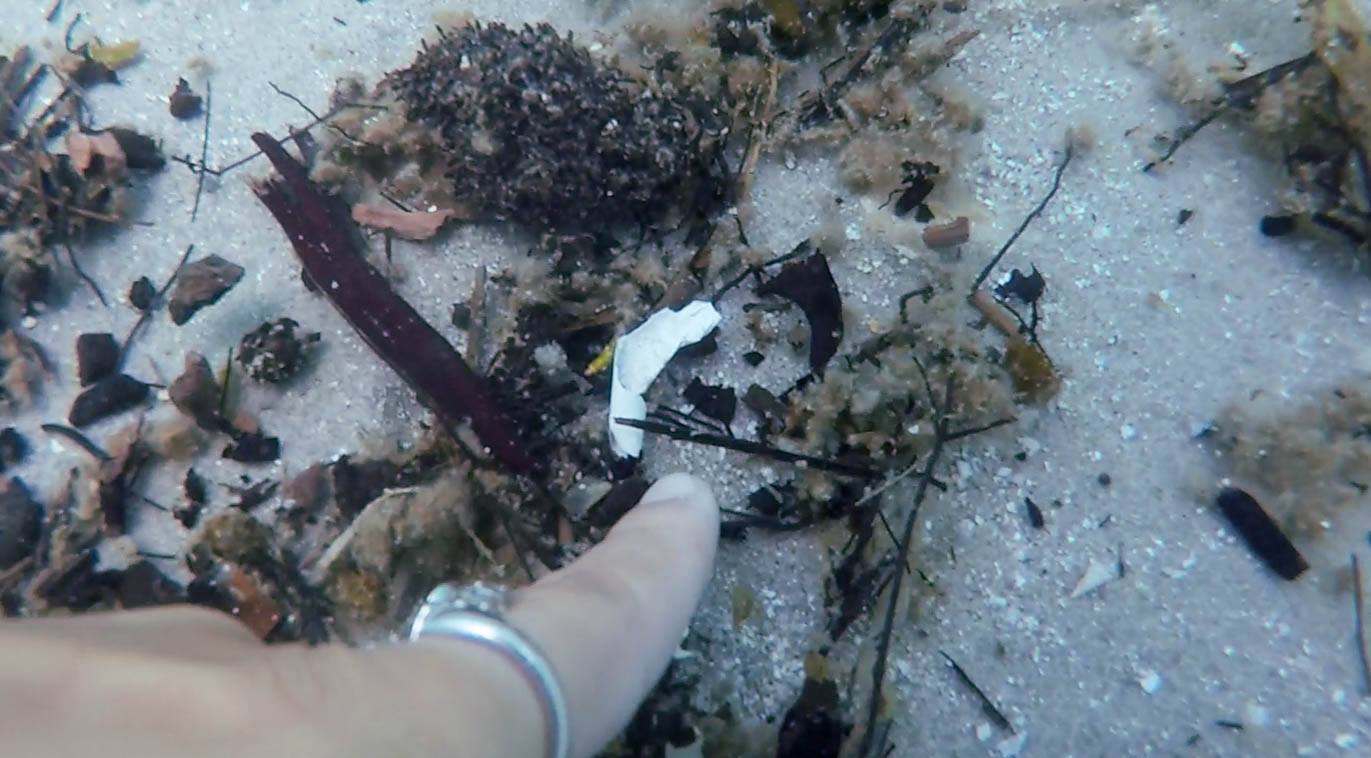 Plastic in the oceans

When plastic ends up in the oceans, it begins to break up into smaller pieces. These minute pieces get attached to algae growths and can get ingested by fish. Soon, they are travelling up the food chain slowly filling the bellies of the largest predators. In fact, certain turtle species have been found with over 50% of the population documented as having consumed plastic.

This eventually leads to starvation as the plastic gives them a sense of fullness without giving them adequate nutrition. Plastic bags in the ocean are also sometimes mistaken for jellyfish by certain turtles, causing them to choke to death on them. Not pretty imagery of all our oceans creatures getting suffocated by plastic. But that is not all, the microscopic plastic pieces travel around the oceans on the prevailing currents making sure that every beach, in the least habituated place in the world, still has beaches filled with trash. What were once known as ocean gyres, or the prevailing circulating currents in our oceans, are now known as plastic gyres. This creates imagery of giant floating islands in the middle of the Atlantic and Pacific ocean. The reality however, is much worse. If they were giant islands of rubbish maybe we could develop a system to take all the garbage out. But considering it’s the microscopic plastics spreading from the choppy surface all the way to the depths of the ocean, just like sand particles or microscopic animals, it’s a near impossible task to clean.

There are few people who are fighting to develop technologies to clean the oceans from this microscopic death storm. Young entrepreneur Boyan Slat has created the Ocean Cleanup , which has just received funding and is on its first few prototype missions, using the natural current systems to channel water and debris into giant nets. Mr Slat hopes to then use the collected plastics for recycling or future projects.

Otres Eco Community in Cambodia is attempting to raise enough money to purchase a plastic shredder to process all the plastic bottles and cups they find during their beach clean ups. Using the shredded plastic as a building material, filling plastic bottles with plastic pieces, to create recycling bricks. But even initiatives like this don’t get rid of plastic for good. 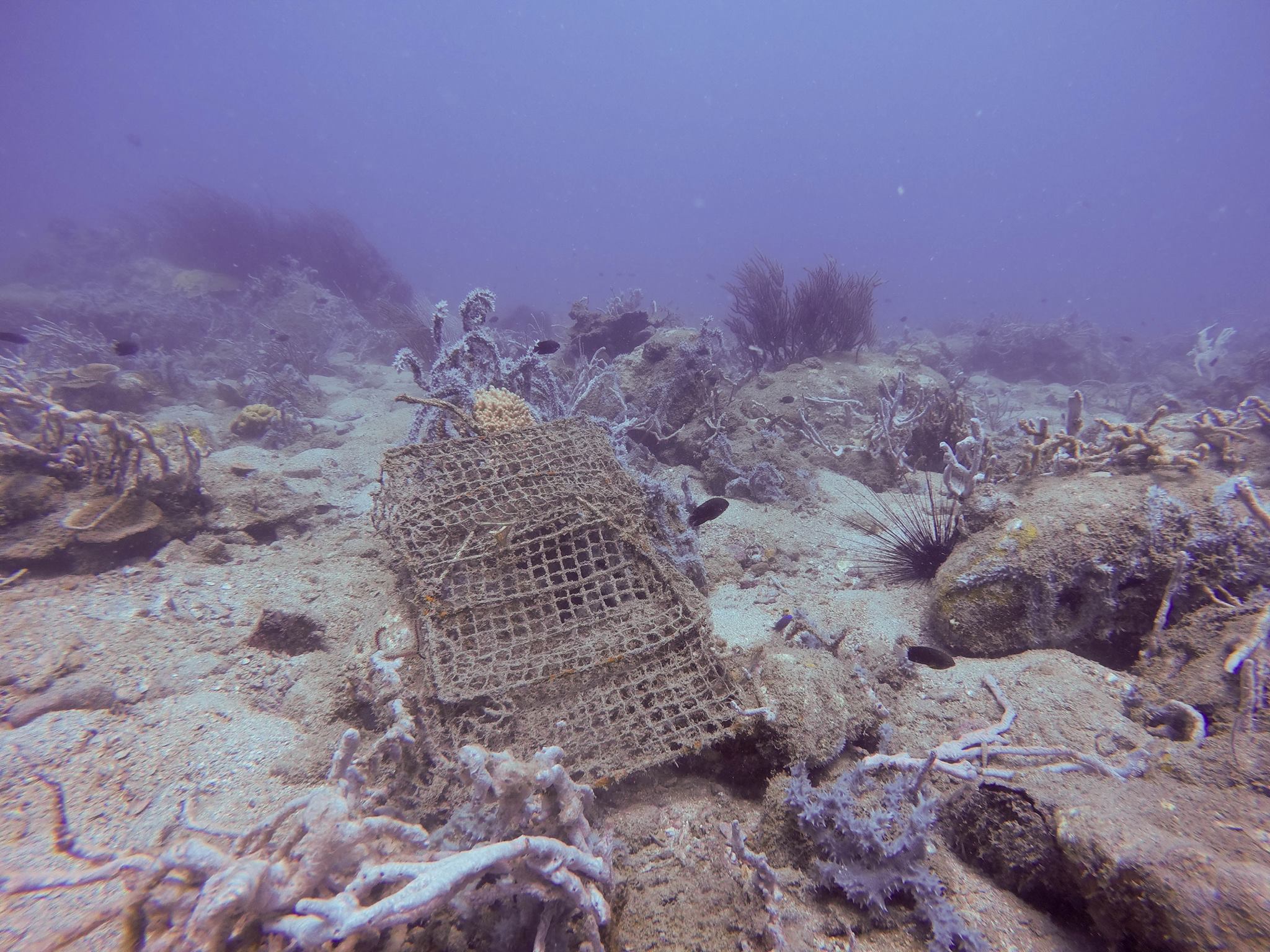 Recent studies with various plastic eating bacteria and caterpillars show that nature is doing what it always does. Using the situation to evolve species specifically meant for this plastic-over run earth. Maybe we are getting a second chance to get our act together and move away from these harmful substances. Maybe hemp packaging is a solution? Going back to our roots and using glass? Alexis has an awesome page showing you all the alternatives you can use for plastic.

This site uses Akismet to reduce spam. Learn how your comment data is processed.