What happens to our waste? A visit to Tridel Centre | Life Without Plastic
559
post-template-default,single,single-post,postid-559,single-format-standard,ajax_fade,page_not_loaded,qode-page-loading-effect-enabled,,qode-title-hidden,hide_top_bar_on_mobile_header,qode-content-sidebar-responsive,qode-child-theme-ver-1.0.0,qode-theme-ver-16.7,qode-theme-bridge,disabled_footer_bottom,wpb-js-composer js-comp-ver-5.5.2,vc_responsive 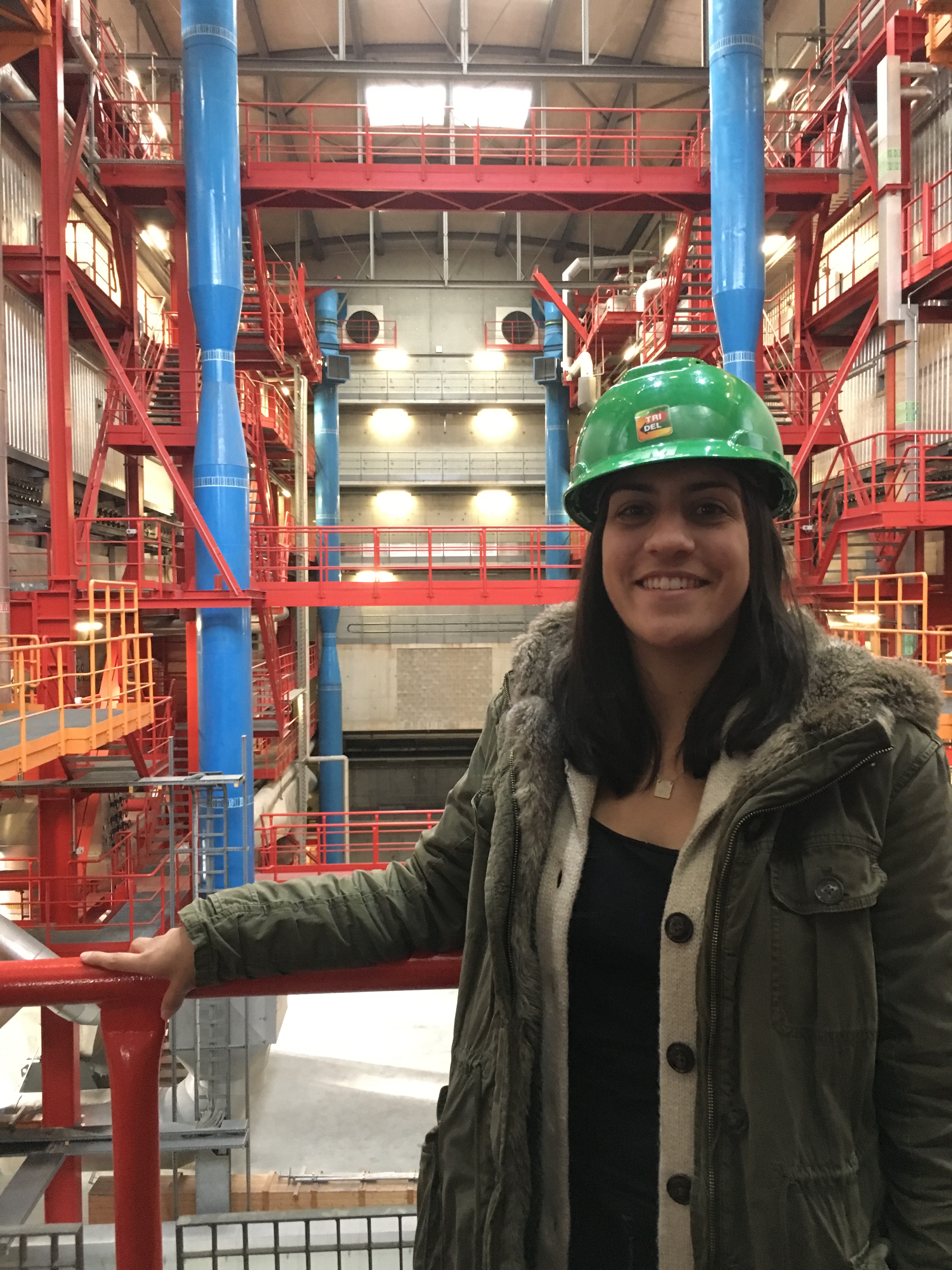 17 Jan What happens to our waste? A visit to Tridel Centre

Posted at 17:50h in Thoughts by Alexis McGivern 0 Comments

Yes I’m here – still alive, even though my last post was in July. I don’t know about you guys, but I felt like last year was a year when I was constantly wishing for more hours in the day! 2017 was a super exciting, fun and challenging year. Though plastic pollution is becoming an increasingly popular and talked-about issue, the problem is still getting worse. I’m glad that many companies, governments and communities are taking action, but there is still so much work to be done.

One of the highlights of last year for me was delivering my first ever TED Talk! It took me about a month to write, re-write and ruthlessly edit my speech, and another 3 weeks of constant practice, so I’m really pleased with how it turned out. I can’t believe the amount of work that goes into just 18 minutes of speaking! You can find it here.

My New Year’s Resolution is to be more consistent about posting, and I have an exciting mission for 2018: to find out what actually happens to our waste once we throw it away and communicate that here. It’s funny how once things are gone from our sight we tend not to think about them anymore, and we picture this magical process of recycling that washes our hands clean of the waste we’ve produced. In fact, recycling and waste management are a massive feat of energy, engineering and really careful coordination that still result in huge amounts of waste being sent to landfill.

Even though I’ve been obsessed with trash for almost five years now, 2017 marked the first year I ever actually visited a waste management facility! Can you believe it? In November I got to go visit a centre called Tridel, a centre in Lausanne in French-speaking Switzerland (near where I live). This was a visit organized by Zero Waste Switzerland, an awesome group of passionate people in the area who also run tons of workshops, social gatherings and information sessions. (If you’re in the area, be sure to check them out, I’ve linked their page).

So Tridel is a centre that services a large part of French-speaking Switzerland for “valorisation thermique et électrique des déchets”, which, if you don’t speak French, basically means the conversion and usage of waste for heat and electricity. The canton of Vaud introduced taxed garbage bags in 2013 in an effort to massively reduce the amount of food and recyclable waste that was being put into ordinary garbage bags. This initiative has been really successful, because it costs you dearly to throw away waste: each individual garbage bag can cost between CHF1 to CHF 6, depending on the size.

However, despite the success of this taxation scheme, there is still a huge amount of non-recyclable and non-compostable waste being thrown away every day. According to the Tridel centre, if all the garbage bags collected in the canton of Vaud in one year were lined end-to-end, it would circle the earth four times. That is MIND BOGGLING. This is a small canton in an extremely small country: that statistic has stuck with me so deeply since I heard it. 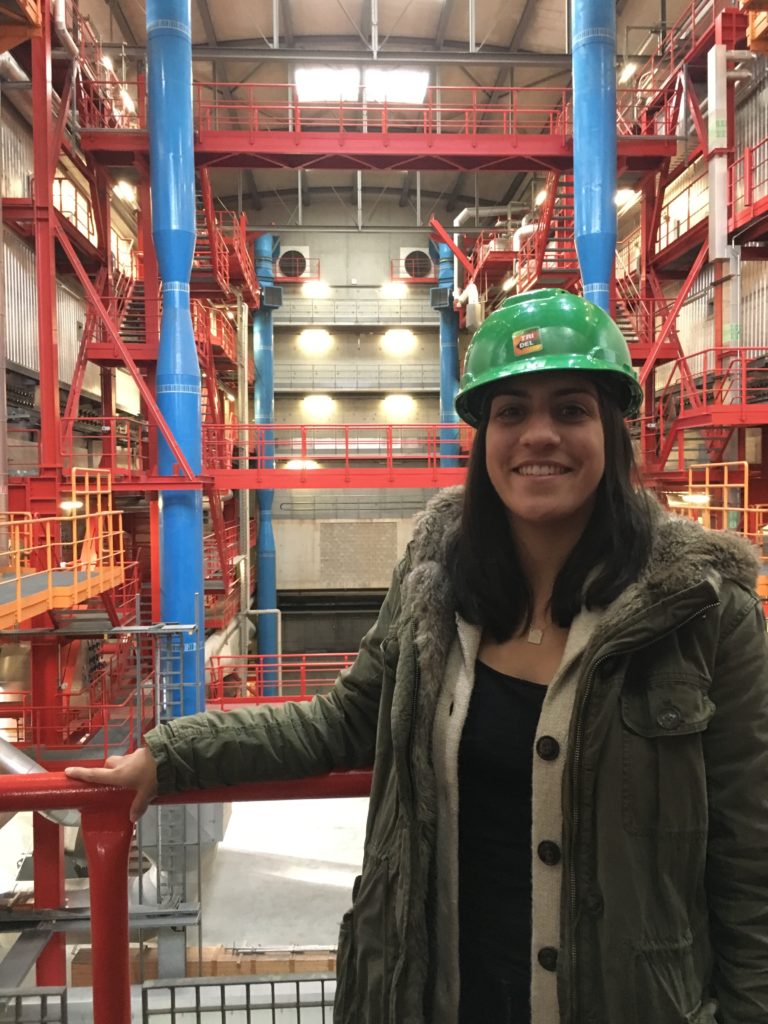 Looking sufficiently nerdy with my safety helmet. I’m safe if any trash falls on my head!!!

So, without further ado, here is an overview of the thermal and electrical recovery centre for waste. Waste is picked up at the communal level, compacted and delivered by train or truck to the centre, which is divided into four main areas:

The first stop on our visit was to the concrete pit that serves as the main reception area for waste. Trucks dump in deliveries from the side of the room. This huge room (capacity for 10,000m3 or 4000 tonnes of garbage) apparently fills about every 2 weeks, which is so shocking. A massive claw from the ceiling moves around the room and mixes the waste together – this allows for better burning when it moves to the next stage of incineration. 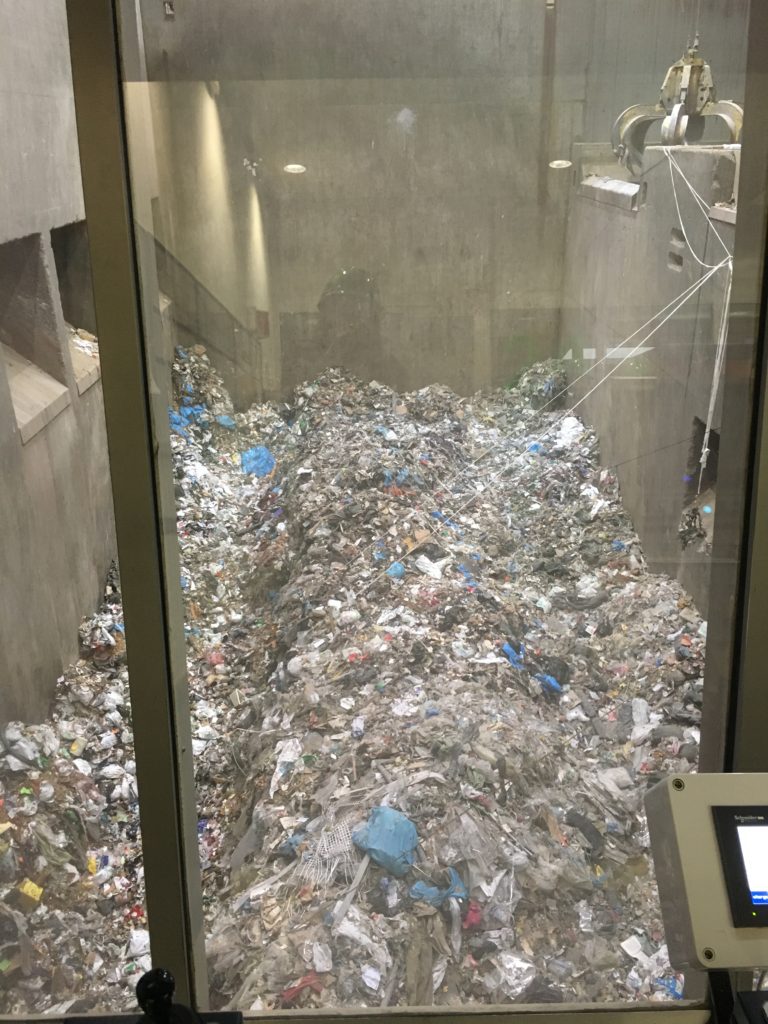 The slots on the left hand side are where the delivery trucks dump the daily shipments of waste.

From this big room, the claw picks up mixed waste and sends it to the incineration chamber, where waste is burned at a temperature of 1000°C. 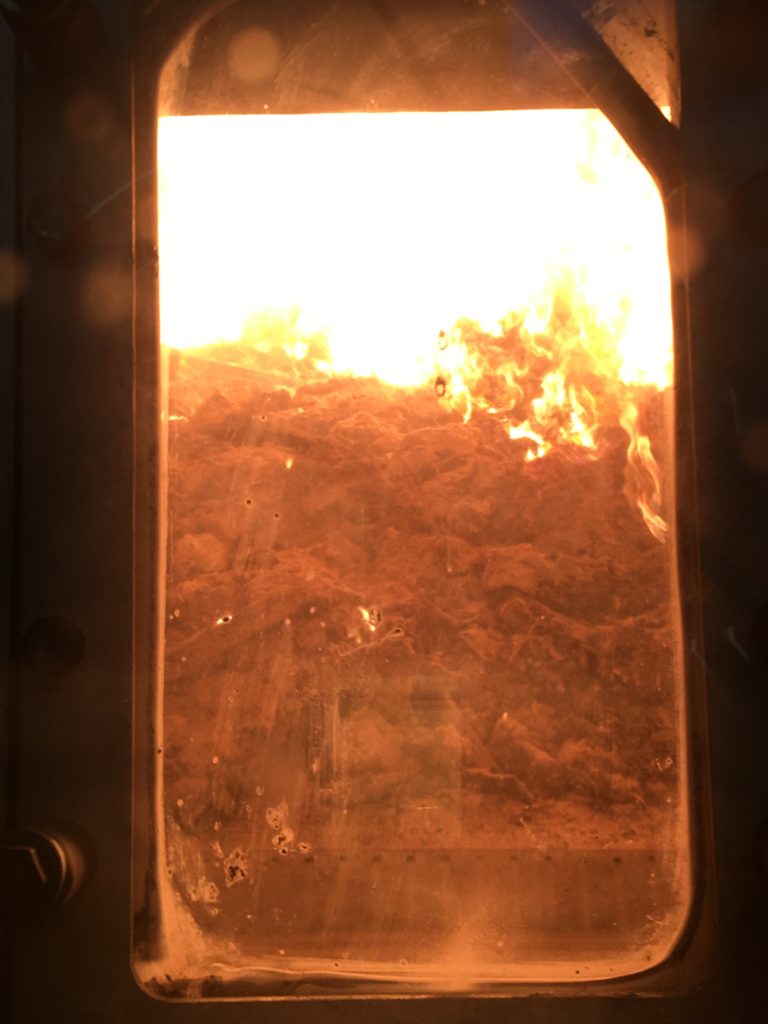 The ash from the incineration is treated through a magnetic process, sprayed with water droplets (collected rainwater), chemically neutralized and then treated with a catalyst to break down nitric oxides. This part of the process is pretty complicated, and I’m trying to keep this post as short and sweet as possible, but more is explained in this educational video.

Finally, the purified gas (which is safe according to national air pollution standards) is released through an 80m chimney. The remaining ash is cleaned with water and dehydrated before being put into a landfill (and the water used to treat the ash is treated before being released into the sewage system). 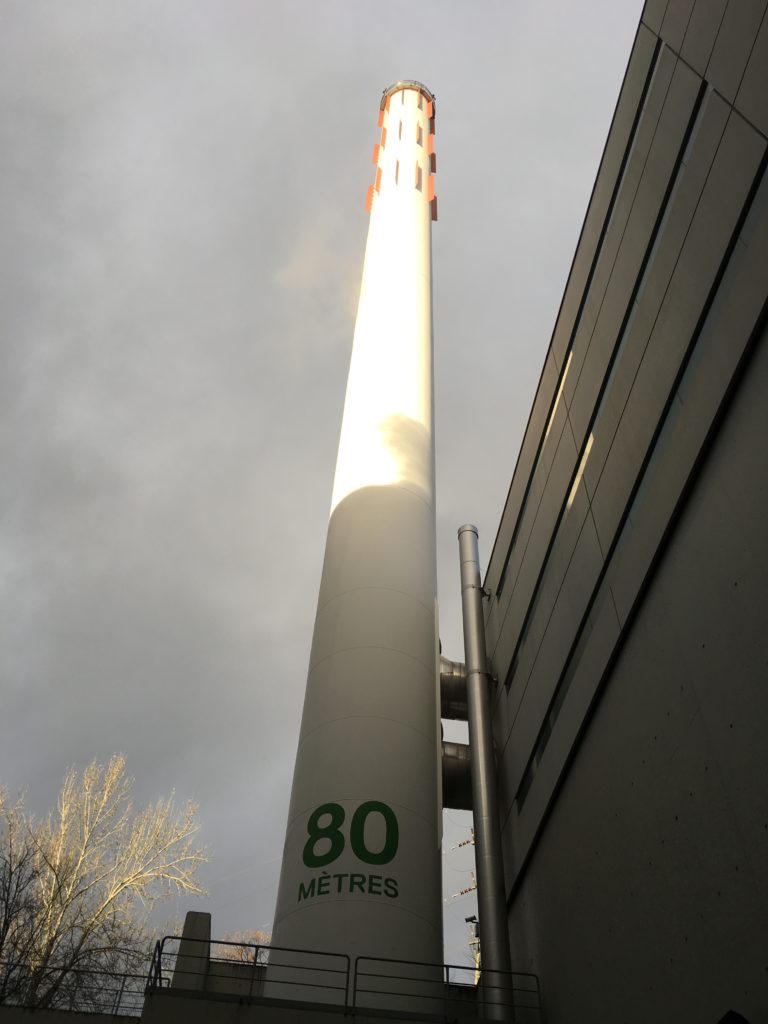 Going back to the incineration part of the process, we can talk about energy production. The heat from the incineration is captured through a massive water boiler and pipe system, producing a water vapour of 400°C. In the winter, this steam is used to supply heat to buildings and homes connected on the network. In the summer, the steam powers a turbine connected to a generator to produce electricity. This electricity powers the operations of the plant, and the rest is put into the city’s electricity grid.

This is just one centre in a small country, but it processes over 150,000 tonnes of waste each year. As impressive as the centre was, I was really struck by how the whole this was almost grotesque: this massive centre, all the energy that’s used to run it, all the great people who work there, all the logistical coordination that’s involved in running it, that’s all because of our insatiable consumption. Switzerland is also one of the wealthiest countries in the world, and is incredibly lucky to be able to dedicate so many financial and energy resources towards an operation of this scale. What about places where waste management facilities are not so developed? This is the case in many developing countries, where infrastructural issues, finance and logistical coordination are just three of many barriers that limit safe disposal of waste. 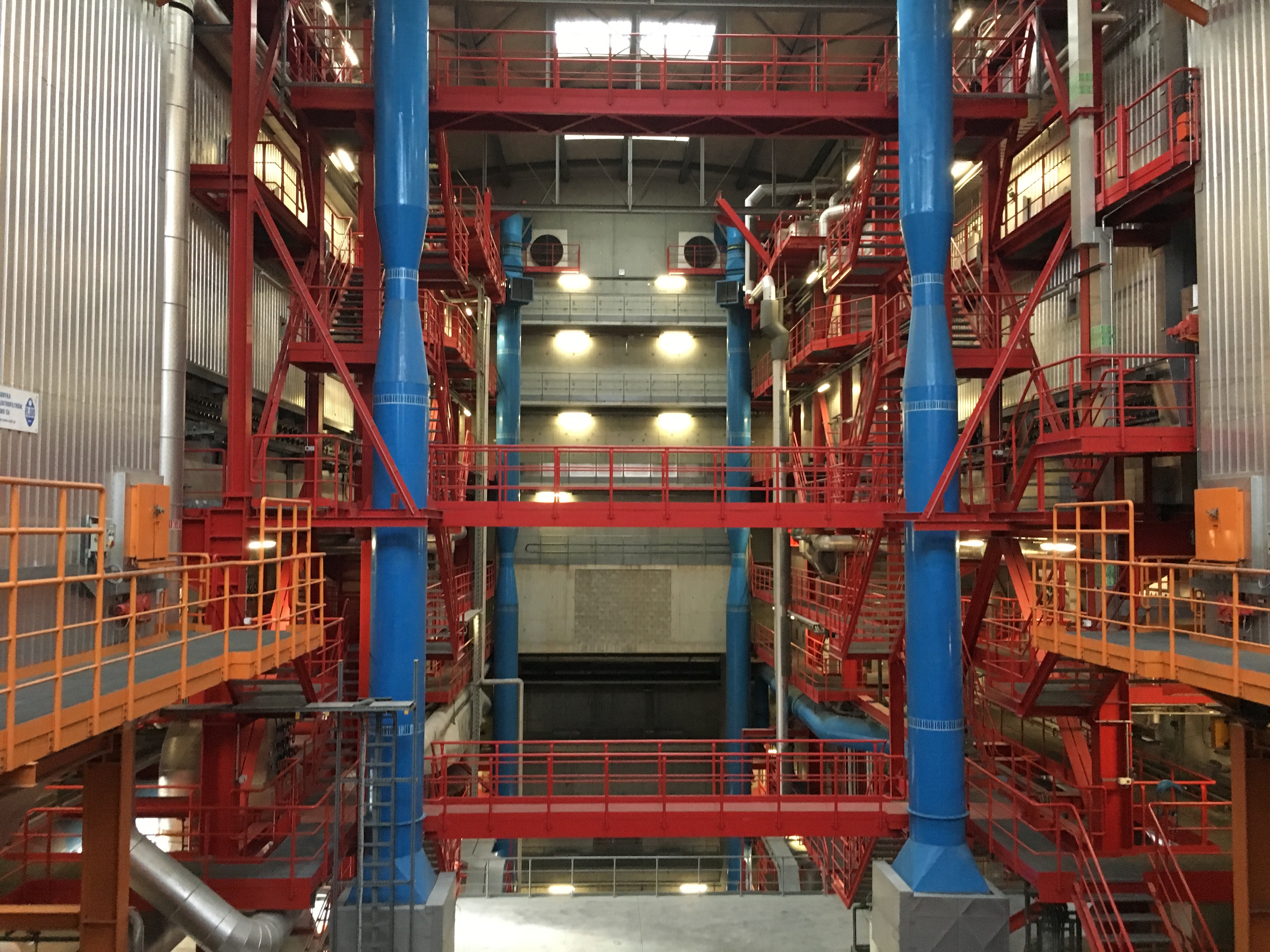 Huge and colourful – but I wish we didn’t need it!

In the issue of plastic pollution (as with many other environmental issues, including climate change), the people who suffer disproportionately are those who are poor and marginalised. It’s important to always remember that environmental issues are also deeply embedded into other social issues, particularly with regards to racism and classism. It’s no coincidence that wealthy and privileged people feel basically no consequence for their consumption while others (often people of colour) can become sick and face early death because of the chemicals in plastic. While the Tridel centre was incredibly sophisticated and well-thought out, I couldn’t stop thinking about the health issues that arise from contamination of water or soil in the developing world because of open landfills or burning pits. By the way, this subject of environmental racism and the social injustice of plastic pollution was covered in a great TED Talk by Vince Jones:

I’ve somewhat deviated from my original intent of this post, which was to explain what happens in a thermal and energy and recovery centre, but I do think it’s important to discuss how all these issues tie into one another.

My plan for this year is to visit and de-mystify more waste management centres to give you all a clearer picture about what happens “on the other side”. Stay tuned!

This site uses Akismet to reduce spam. Learn how your comment data is processed.